Land to the North of Ware Street

This application sought permission to erect seven detached houses in land to the rear of Apple Tree House on Ware Street, just to the east of the Hockers Lane junction.

Summitted in September 2016 the application was refused by Maidstone Borough Council in February 2017.

The applicant lodged an appeal but this was dismissed in January 2018.

The Application      The Society’s Response 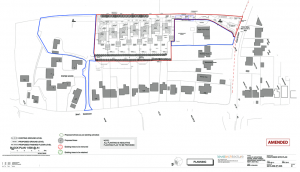